As if you didn’t already know, I LOVE my little black Yaris.  It is the CUTEST thing on 4 wheels.  Yet, no one appreciates it.  Everyone has told me to get a new car, but I’ve hung on to it for 8 years now.  The car has seldom given me any problems other than some battery and tire issues, but you’d expect that for a car with 116K miles.

As cute and reliable as it is, I most likely will perish in a crash on the freeway.  It was never an issue prior to moving to CA, since I was hardly ever doing any freeway driving.  But now, the 5, 55, and 22 are part of my daily commute, so J & I finally decided that it was time to get a safer car for me.  It’d be easy to assume that I’d just get a bigger car like the ever dependable Toyota Camry or Honda Accord.

Ever since the Audi came out with the new generation of A6 in 2012, I was in love.  Not with the car, but with the LED headlights.

I’m not a driver enthusiast (as can be established by the fact that I own a Yaris), so V4, V6, V8, tiptronics don’t mean diddly squat to me.

But, I am drawn to shiny things like moths are to fire.

The LED headlights on the A6…

Of course, not all lights are created equal.  BMW, Lexus, and Mercedes LED lights are all blah, and so not exciting.  And don’t get me started on the new Range Rover lights – what were they thinking?

But the Audi?  It’s pure design genius.  Do I throw caution to the wind, ignore long held beliefs that German cars have terrible reliability track records, and pay dearly just for lights? 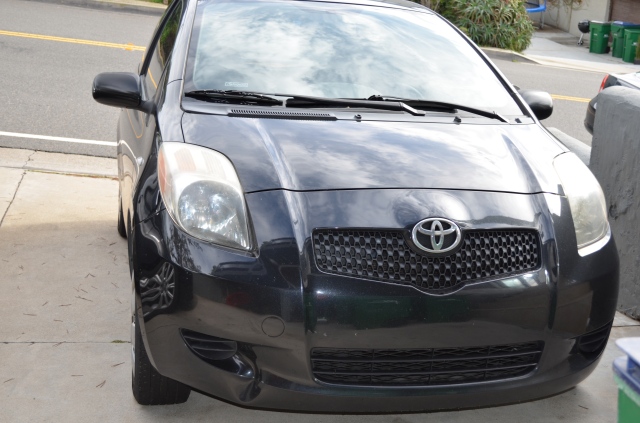 Little Yaris (right lower bumper got smacked by a tire tread while on the freeway),

meet your high maintenance sister, A6.

This entry was posted in Yaris. Bookmark the permalink.