Overall I’m not a very competitive person, much to mom’s chagrin.  Mom had always told me not to compare myself against the C student, but you know what, it’s just so much more uplifting that way than to compare against the A student.  When it comes to running, I’m not racing people running 6-7 minute-miles, but I love chasing down all the joggers and shufflers, and declaring myself the fastest runner that morning (just as long as I don’t get passed by a real runner).

This past weekend I was logging my 10 miler, which I normally run at a 8:20-8:30 pace, and what did I see 1/4 mile up ahead as we were starting our run?  A runner who looked ‘beatable’.  I told J that I was going to chase him down (J doesn’t really care either way, but if I pick up my pace then I’ll be running closer to his comfort range which is about a 7:50-8:00), so ‘we’ (mostly me) started gunning for this guy, picking up the pace from 8:40 for our first mile to 8:20 for the second.  We still hadn’t caught up to him by mile 3, but we were closing the gap, and I got a better glimpse of this guy and thought, ‘Cow, he’s fast for a big guy!’  Not muscular, not overweight, just big boned.  At this point, we were running 8:10/mile and I was getting concerned that I wouldn’t be able to keep up at this pace for another 7 miles, but heck I so wanted to beat him.  Past mile 4 we were close enough to him that he was aware of us, and what did he do?  He picked up the pace.  J turned back at his usual 4.25 mile mark since he only runs 8 (and couldn’t care less), but I told J that I wasn’t turning around until I passed the guy.  Big guy ended up turning around soon after.  I was still at his heals, and I realized that he would speed up when he ‘heard’ me, and slowed down when my breathing ‘faded’.

Finally, at mile 6 I was close enough I could touch him.  I intentionally coughed, sputtered, and breathed loudly in his ear, basically telling him ‘Dude, you either speed up or slow down’ because at this juncture, I wasn’t sure I could keep up at this sub-8 pace for much longer.  All of a sudden he took off sprinting, and I thought, ‘Game over.’  But what happened after he sprinted for 50ft?  He turned around and headed the other way.  I intentionally didn’t acknowledge him because I wanted to act cool, but it was a different story inside my head.

Why is his turning around???  Isn’t he going to run back to where he started, which is another 2-3 miles ahead?  Is he looping back to chase me now?  Or is he running out of steam and can’t keep up, but is too embarrassed to be beat by a woman, so he’s looping back behind me?

I suspected that he was running out of steam, which meant good news and bad news.  Good news: I won!  Bad news: I had to keep up the same pace for the next 4 miles to ‘save face’ (god forbid if he passed me as I was slowing down).  Luckily, I was able to dig in my heels and maintain 8-minute mile for the rest of the run, and what did I see when I turned around at mile 9.25?  Mr. Wildebeest…1/4 mile behind me! 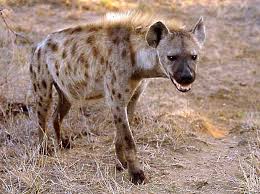 This entry was posted in Running. Bookmark the permalink.