Just got back from SF yesterday evening, hence the gap between posts.  We got in to SF Saturday morning, and the first thing that hit me was “Where are all the white people?”  The whole airport was teeming with asians.  That’s when I knew I’ve been in Tucson for too long, when I’m no longer used to seeing a ‘sea of yellow’.  However, I quickly got over the initial shock and was determined to get some breakfast.

You know the subway system is outdated when you can’t punch in the exact amount you want charged to your card.  Instead you have to manually ‘add/subtract’ from a preset amount.  One would think with all the engineers in Silicon Valley, someone would come up with a more sophisticated system.  Go figure…

While waiting for the first ferry out to Sausalito, we decided to search for some eats in Chinatown. 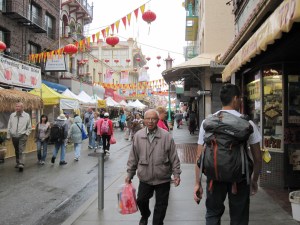 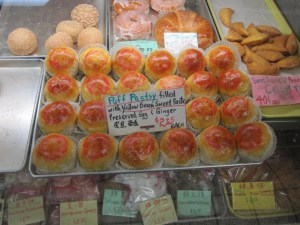 In time for Autumn Moon Festival.

Found some moon cakes at the second bakery, but we opted not to get any since neither one of us likes moon cakes.  They’re just nice to look at.  We ended up settling for some mediocre buns, which were still 10 times better than what we can get in Tucson.

After some futile search for good food, we arrived at the the ferry terminal. 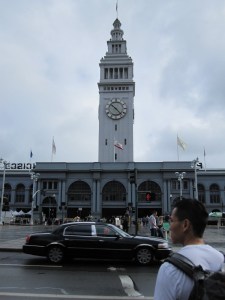 The 10:40 am ferry got us to Sausalito just in time for a short run along the bay before the wedding ceremony at 2PM.


Unfortunately, no one warned us about the steep hills we were going to run up.  However, the view of the bay and the Golden Gate bridge more than made up for that minor problem.
http://connect.garmin.com:80/activity/embed/49575661
Our very first Catholic wedding ceremony.  A lot of rising, sitting, and some kneeling during the 45-minute ceremony.

Looking across the water.

The best part of the day was getting the chance to spend time with old friends, and having a crazy night.  J got a little carried away with the dancing, with the bride might I add, whom he’d met for the first time.  As soon as I get the video footage from F, I’ll be sure to send it out (while you’re watching it, keep in mind ‘Mr. Bruce Lee-Travolta’ was as sober as he was while in church). 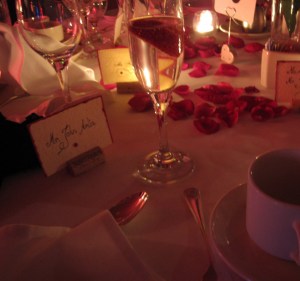 This entry was posted in CA, Running, Travel. Bookmark the permalink.